I assure you, the rest of the Juana series is coming. I've been a little busy over the past few weeks. 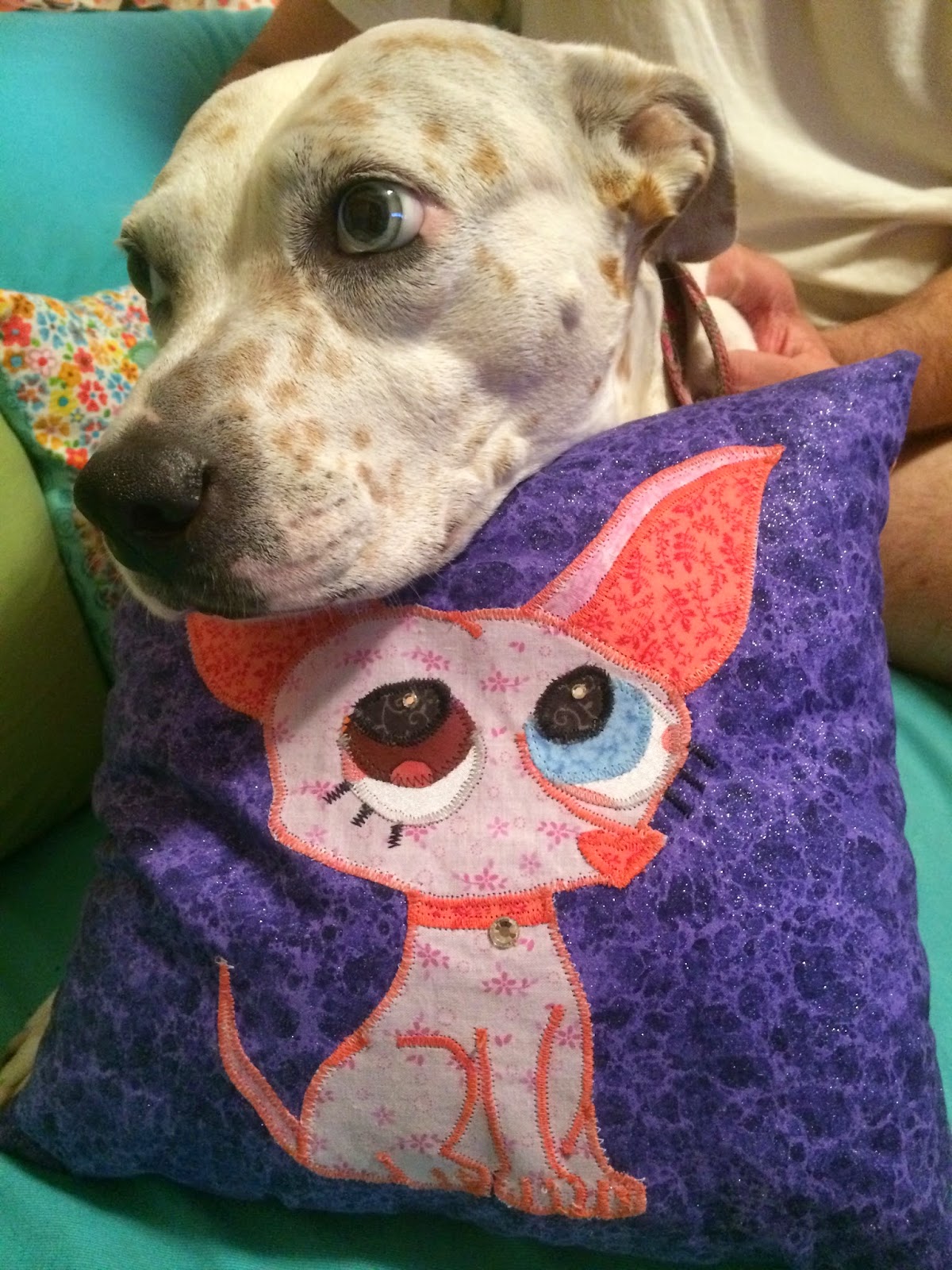 For starters, our 8 year-old dog, The Doodlebug, was diagnosed with anemia some weeks back. She's doing much better now, but the vet bills are stacking up (blood tests, vet visits, prescriptions, etc.) To help cover the expenses, we're making Doodle pillows (pictured above, with The Doodlebug.) The response has been overwhelming, and I've spent a pretty fair chunk of my time slaving over a hot sewing machine.

This experience has inspired some thoughts regarding fundraising and social media, and I will share those in due course. 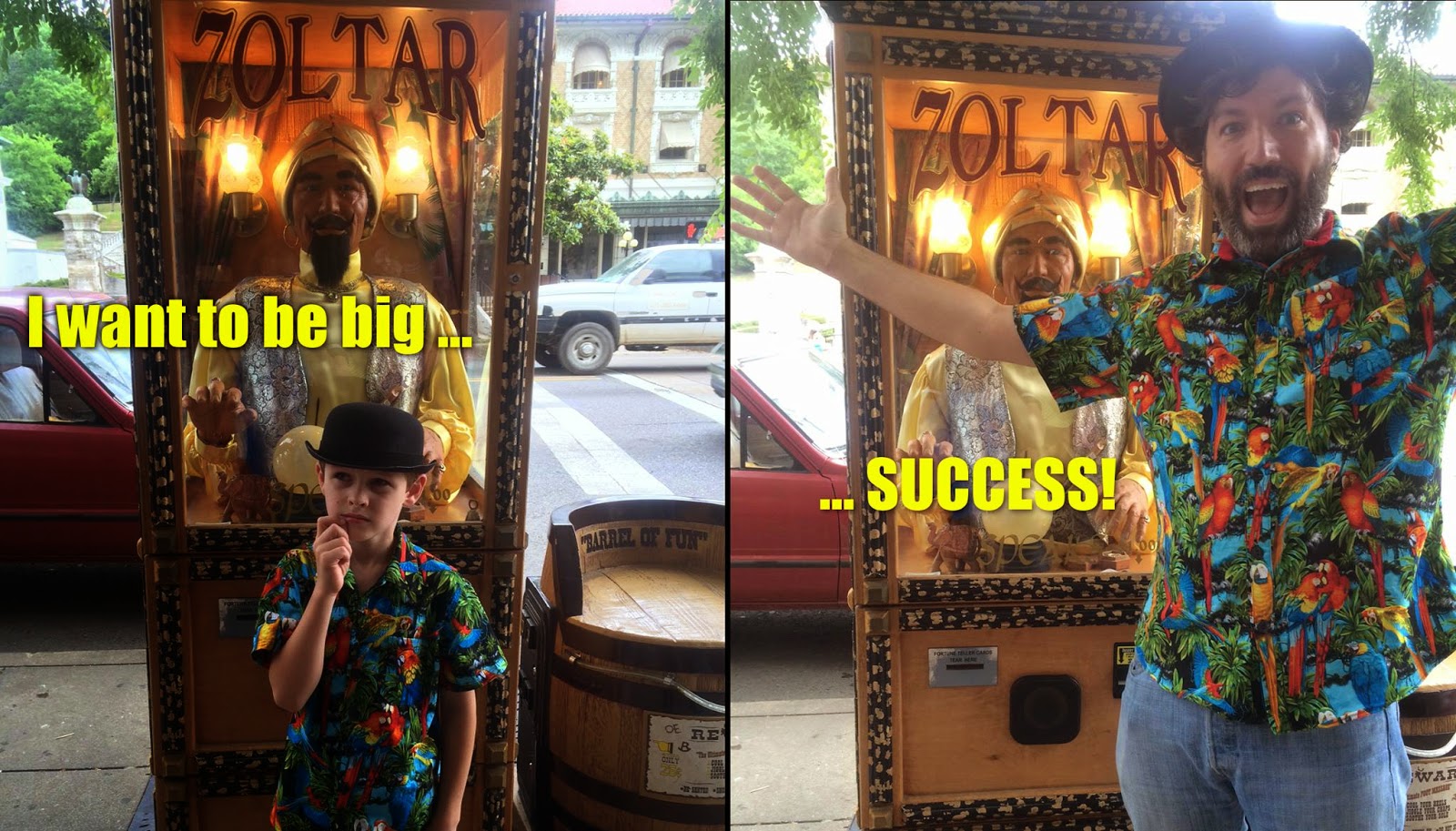 We paid visit to Hot Springs, Arkansas over the weekend. It was time to see the families and share the stage with the lovely ladies and gallant gents of Foul Play Cabaret. I also spent a chunk of Saturday with my nephew-in-law (pictured above, on the left) putting together a set and busking at Adair Park on beautiful Bathhouse Row. The kid's a natural.

I love performing in Hot Springs. It's where I graduated high school, where I met my wife (performing in The Crucible with a local community theater company), where we wed, and where we crashed for a little bit after college. The arts scene in Hot Springs is incredible, and its the thing I miss most about not living there.

Arkansans have a distinct DIY ethos that I haven't encountered anywhere else; a combination of imagination, determination, and defiance that is yet grounded in modesty and community spirit. It is inspiring to be around artists who possess that DIY ethos. It makes me want to be a better person. 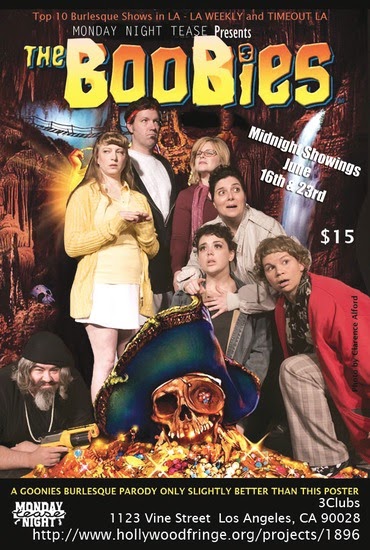 Peppered in around pillow-making and travel to Arkansas is a veritable cornucopia of projects, props, writing, performances, and Gorn-knows-what-else I've committed myself to. Oh yeah. Like that burlesque parody of The Goonies that will be playing Hollywood Fringe Fest. I'm in that.

In short, the rest of the Juana series is coming.

Oh yeah, while I'm thinking about it ...

I've never had any takers, but what the hell? I might as well run it up the flagpole again. If anyone out there is interested in reviewing some shows at HFF for Mad Theatrics, shoot me a line (madtheatricsATgmail.com) and we'll talk. We have a specific approach to how we write reviews around here, and we prefer our reviews to be written by folks who have actually been involved with producing theater.

Someone once called Mad Theatrics "a refreshing, unrehearsed and intelligent alternative voice in the LA scene." It's certainly something I aspire to, and I'm always interested in bringing on more unrehearsed voices.
Posted by Andrew Moore at 10:04 AM No comments: Links to this post


[NOTE: I've redacted the names of the players, including the theater company that produced Juana. You could easily figure out who's who with a little bit of poking around, but I ask that you don't. In all likelihood, these folks would rather you forget they were involved in this travesty, and who can blame them?]

Part one may be found here. To sum up: in 2007 I helmed a disastrous production of an epic piece of theater. I lived to tell the tale, which is exactly what I'm doing.

The Theater Company's dedication to developing new works enticed me to join as a playwright. A week or two after they welcomed me into the fold, the Artistic Director took me aside. He had heard through the grapevine that I was a puppeteer.

The Artistic Director wanted to bring Juana  to the stage. It would be a huge undertaking: The action takes place across Europe, over a span of 30 years, with a massive cast (north of 70 characters), battles, and supernatural elements. The AD had a bold idea make this work: use puppets. Granted, at first blush, that's not much of an idea.

I've worked professionally as a puppeteer, and I've designed and built puppets. Back in college, I designed and oversaw the build of a large cast of puppets for a production of Allen Partridge's Rumpelstiltskin Revised. Hell, our production budget for that show was miniscule -- the costume designer, set designer, and I actually pulled most of our raw materials from the massive stock of costume pieces the theater department had in storage.

At first, the offer was simply to design and execute the puppets needed for the show. A little later (weeks) the offer was to direct the show AND do the puppets. Implicit in the offer was the promise that a play I was working on (a play set backstage at a burlesque theater in WWII-era San Francisco) would be produced the following season.

I jumped on the offer. It seemed a tall order, but with the full support of Theater Company behind me, I couldn't possibly fail!

I was given "the play." In fact, I was given a screenplay and a treatment for Juana as a television series. I emailed The AD, who in turn emailed the playwright, and before long I had a PDF of the play in front of me. It had issues -- it seemed little more than a loose adaptation of the screenplay to the stage -- but I also had assurances that the Playwright was more than willing to play ball, and make any needed revisions.


And so I set to work, studying the play, doing my research, writing up my director's analysis, and doing some preliminary design work on the puppets. A month after receiving the play, I met with the Playwright. He was a very warm man, emotionally connected to Juana in a way that was moving to me.  He was very supportive of our plans to populate Juana's world with puppets, and showed an interest in my work as a playwright.

We planned on doing a read-through of the play in April, when his health was a little better. He was down for doing rewrites, another draft -- anything that would help get his play in front of an audience.

A few weeks later, he passed away.

An epic play, a pageant that reveals the hidden truth behind history's most maligned and misunderstood monarch -- this is the story of Juana. Labeled "Juana the Mad" by her captors, this propaganda line has dogged her true story through the ages: That the death of her young husband drove her insane; that she inherited this madness from her grandmother.

[Playwright]'s play reveals quite a different reality: A strong-willed, intelligent woman who was seen as a threat to the established patriarchal structure of post-Medieval Europe; an opponent of the Inquisition; and a champion of the common people. Juana embodied the spirit of the Renaissance in a country that was desperately clinging to the last vestiges of the Dark Ages.

This November, we will tell Juana's story. Sixty-plus puppets, brought to the stage by twenty talented performers shall take the audience on an epic voyage through three kingdoms, over turbulent oceans, through the darkest of nights, and ultimately to the truth.

The puppet count is at 67, not including any toy theater or shadow puppets. We will be using a variety of rod-based puppets (pageant puppets, westernized bunraku-style puppets, etc.) performed out in the open (i.e. after the fashion of Julie Taymor/Avenue Q.)

[Playwright]'s play is very cinematic. We cross continents in the blink of a scene change, cross vast amounts of time in mere moments. To help handle these transitions, I'm utilizing toy theater. (As it so happens, a few of these transitions involve large crowd scenes. Yet another reason to utilize toy theater.) 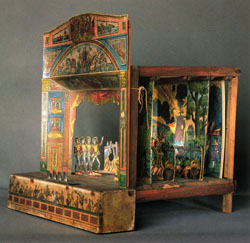 A successful application of toy theater in contemporary theater has been to capture the performance with a video camera and project it on a screen for the audience to view. (See image from Redmoon Theater's production of Once Upon a Time [Or the Secret Language of Birds].) 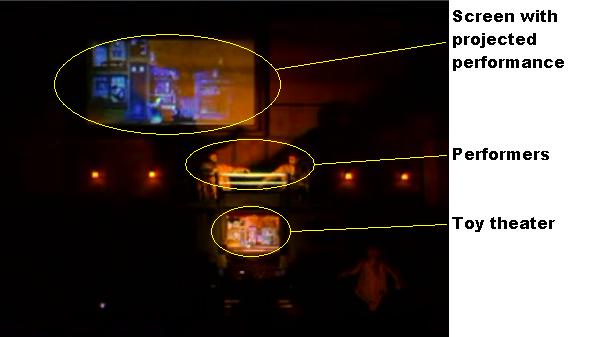 [Playwright] has postulated that Juana was able to keep up with what was going on outside her prison walls by way of extended or remote viewing. At the same time she was in Burgos, a group of Christian mystics were studying this phenomenon. In our play, Juana experiences two visions. We will play out these visions with shadow puppets, a form of puppetry uniquely suited to depicting dreams and visions. 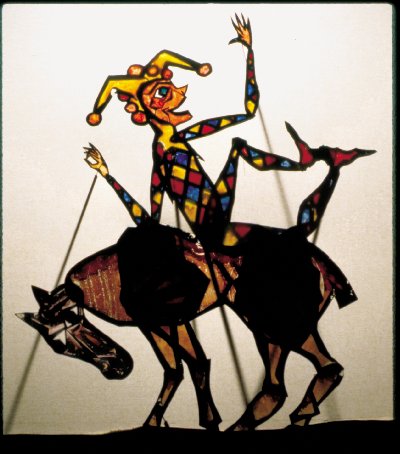 Juana was was a threat to the establishment, and was removed from power. She was placed in the room without light "for her own good," and every attempt was made by her captor (the devious Marquis of Denia) to drive her insane. It was a nightmare scenario, and one that Juana briefly emerged from in 1520 when she presided over the legislative assembly in Spain, demonstrating a soundness of mind and intelligence as she attempted to transform Spain into a democracy.

"The use of puppets in this production will enable an expressionistic take on her story. The audience will experience the madhouse in which Juana found herself: surrounded by monsters who meant to do her in."

The use of puppets in this production will enable an expressionistic take on her story. The audience will experience the madhouse in which Juana found herself: surrounded by monsters who meant to do her in. In the case of Fernando, he will be a nine-foot-tall pageant style puppet. (This particular point, how Juana perceived those around her and how this works with the puppets is a point I discussed with [Playwright]. He was rather excited about the idea, and took a copy of my initial sketches to show around.)

Furthermore, we will be designing the puppets and creating an environment informed by the sort of things that would have served as nightmare fuel for a much younger Juana, growing up in the castles and cathedrals of the Catholic Monarchs. Specifically, Late Medieval and Early Renaissance religious art.

Posted by Andrew Moore at 12:59 PM No comments: Links to this post