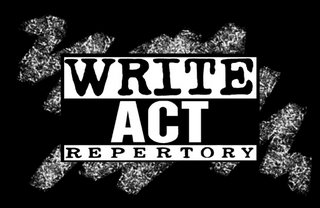 I am pleased to announce that I (Andrew) have joined Write Act Rep!

Later this year I will be workshopping Torrid Affaire for the company. I will also be designing and overseeing the construction of a full cast of puppets for an exciting period epic.

The theatre has always been square zero for me. My home. When Pamela and I produced Torrid Affaire last year it just felt right. Sitting in the darkened house, making notes during rehearsal, coming down to the line . . . I actually felt relaxed. That's just crazy.

I wanted more of that feeling of -- dare I say "completeness?" -- so I had planned on self-producing Sonny this year. And then Pamela joined Write Act. I tagged along to work calls, took in a few shows, and just fell in love with the whole thing. The facility is capacious yet cozy, and the people are dedicated and so very talented. The concern I felt about taking on (again) the awesome task of self-production eased off. There was no longer any need to "go it alone."

I was reading over Andrew Rhodes' great comment to a recent post, when the thought occurred ... why not do a quarterly "Mad Theatrics" journal/magazine? An e-zine about theatre from the trenches? Sort of a bruised-knuckle, roar-of-the-greasepaint/smell-of-the-crowd take on "American Theater Magazine." The content would be assembled from general submissions from whoever wants to submit. Articles can be written by theatre professionals or theatre fans. We can print reviews, theory, short play scripts, etc. And the whole thing is a free download available seasonally.

The editorial board shall consist of me (for right now.) If this thing turns into something interesting, maybe I'll expand the board and get more sophisticated, but for now it'll just be a Rough Theatre e-zine lorded over tyrannically by me.

Thoughts?
Posted by Andrew Moore at 12:57 PM 2 comments: Links to this post