“You can’t steal a gift. Bird [Charlie Parker] gave the world his music, and if you can hear it you can have it.” -- Dizzy Gillespie 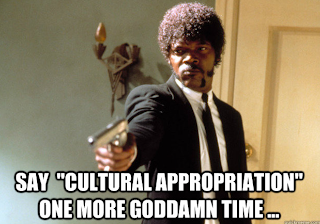 Regarding Miley Cyrus and twerking ...

MISappropriation. That's the problem: misappropriation. Appropriation is a good and necessary thing for the creation of art and the furtherance of ALL culture. Flamenco dance has its roots in Jewish folk dance. Traditional Mexican music has Germanic roots. The French borrowed the necktie from the Croatians. The Beatles covered the Isley Brothers and George Clinton covers the Beatles. You can't steal ideas and you can't steal culture. The worst you can do is disrespect and exploit a people.

Learning dance moves, singing a certain kind of song, dressing like a different group; admiring the "other" so much you want to be like them in some small way -- this isn't disrespect. It's the sincerest form of respect. It says, "Your culture enriches my life." It expresses love and admiration, like a child who loves an adult so much she mimics the adult's speech patterns and gestures.

We are all learning how to be human, and NO ONE gets to tell you where you can take your lessons.
Posted by Andrew Moore at 10:29 AM No comments: Links to this post

The Right Kind of Synergy

syn·er·gy
n. pl. syn·er·gies
1. The interaction of two or more agents or forces so that their combined effect is greater than the sum of their individual effects.
2. Cooperative interaction among groups, especially among the acquired subsidiaries or merged parts of a corporation, that creates an enhanced combined effect.

John Mayer drops a new album in a few days, Paradise Valley. Mayer (and I have no doubt he's behind this) has made a Spotify playlist available of "Paradise Valley influencers." In other words, this is a curated playlist of songs that informed his songwriting on this album. Here's a link to the playlist.

This is the right kind of synergy, and a wonderful use of Spotify as a tool to both promote an upcoming release and connect with the audience in a personal way. This is something theater companies and producers could and should use!

For example: in my review of The Baby, I made note of the incredible preshow music they play, music that sets the scene better than any preshow program in recent memory. There's no reason why that playlist couldn't be put onto Spotify.

Or perhaps the composers behind the original music in a show like Songs of Bilitis or Watson and the Dark Art of Harry Houdini could post playlists of their "influencers."

To reiterate my advice for using Pinterest, this tool should not be used for self-aggrandizement. Use it to share with your audience, to initiate and facilitate your conversation with them. Use it to get them excited!

(BTW, I've listened to Paradise Valley, and it is a delightfully informal and warm album. If you're a fan, it's a must-have. If you're not a fan, you may be surprised by its range and listenability. Regardless, check it out.)
Posted by Andrew Moore at 12:47 PM No comments: Links to this post 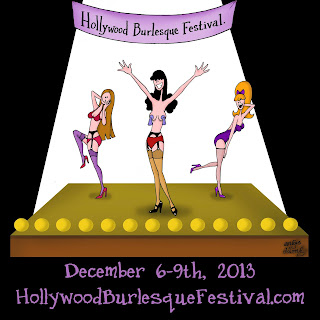 The Entertainment Capitol of the World is hosting the first festival of its kind in our city, the first annual Hollywood Burlesque Festival! The vibrant tapestry of burlesque, it's glamorous history and effervescent present will be represented over nights of showcases, competitions, and film screenings. Talent from around the globe will descend upon the Hayworth Theater December 6th - 9th for this unprecedented event.

Yours truly will be helping out in every way I can, including joining the incredible folks blogging about the festival, and all things burlesque both past and present.

Applications are being accepted from burlesque performers, and advertising opportunites are available. Tickets go on sale starting August 15th, so don't miss that. And don't forget to follow the festival on Facebook and Twitter for updates!

There will be a fundraiser for the Hollywood Burlesque Festival on Tuesday, August 27th at Three Clubs in Hollywood. That's a venue well known to burlesque fans and Hollywood Fringe Festival-goers alike. The line-up so far is nothing short of amazing. Find out more about the fundraiser here.

Burlesque has been my artistic outlet over the past many years, and I couldn't be more excited about this festival. I hope to see you there!
Posted by Andrew Moore at 5:12 PM No comments: Links to this post