Theatre in the Dark - Evening One: Dark 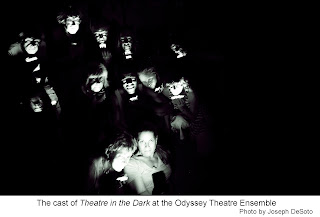 An idea has to begin somewhere even if it can't break from its gimmick and become something that presents an emotional truth that you can hold onto, feel and walk away from the theatre with. The Odyssey Theatre Ensemble has a series of short pieces presented under an interesting light and that is with no lights on. You sit in the dark. You listen. You taste. Your other senses are allowed to flourish. Intriguing. It reminds me of the local Los Angeles restaurant: Opaque.

The pieces were generally fluffy and the thought provoking ones consisted of psych 101 subject matter, "If a tree falls in the forest and no one is there..." The frustrating thing was several of the pieces didn't even fit the premise of the evening (I reference again "Sound in the Forest", which I'm certain was not taking place at night.) If we're going to sit in the dark, presenting pieces that take place in the dark would be the simplest thing to present to the audience. My mind was brimming with alternative pieces to the ones presented that didn't need to be presented in the dark. And many of the pieces simply lasted well beyond the point in which I got it.

In all of this, there was nothing of emotional levity to hold on to. The presentation avoided anything even slightly grounded and real. No searching of real human emotions, for instance the reality of miners trapped in a cave. Instead the actors were directed to perform with slightly comical voices or to simply talk directly to the audience. Drama or intensity meant the volume being turned up to 10. I know when a man on the street yells at me, it doesn't make me feel intensely - I simply stare at him strangely and move on. I don't think there was a single person the entire night that spoke softly or whispered, which when presnted in the dark, is an eerie thing. Instead many of the pieces blended together because there simply was no change in tone or volume or emotion. Maybe this has something to do with the vast number of directors and lack of a unifying vision for the evening.

I'm not a complete hater. There were moments that were ghostly and even (David) Lynchian and those moments occurred when the lights came up just enough to make out a person or some kind of movement on stage. So if you do end up seeing this show, don't close your eyes, you'll miss seeing the best parts in a show that is presented mainly in the dark. Also, while overused, the sound effects were nicely put together. All of this could have invoked the excitement of the radio listening era with a new and interesting edge and twist.

Part two of this festival comes around in two weeks, More Dark (and the two shows will be running in rep). Part of me is still curious to see this done well, but dubious to try again so soon before they can work the kinks out and let the concept grow and breath for a second round.

The lovely Red Snapper gives a rundown of bar costumes vs. event costumes on her blog today:


Bar costumes aren't necessarily intended to be seen from the back row of a large theater.  Bar costumes are a smart investment for a newer performer, for someone with a weekly show, or for someone who wants to hit the ground running and to perform as frequently as possible.

Event costumes are those you intend to sparkle and shine on a big stage.  They need a bit more "wow" than a bar costume because they need to be seen from the back of the house.

Go read the whole thing.  It's fully illustrated with photos from past performances, so beware a little butt crack and cleavage, if you're reading it at work, but otherwise it's 98% SFW.

This reminds me of "rightsizing," a word that has become a euphemism for "downsizing," but which -- when I first heard the term -- had more to do with observation, estimation, and execution with a minimum of wasted effort and materials.  The way I look at it, "rightsizing" is first cousin to "just in time" production, at least in the milieu of intimate theatre.  Knowing your venue and your audience can help advise the choices you make as a producer.

Do you see any correlations between Red's article and theatre production?
Posted by Andrew Moore at 1:13 PM No comments: Links to this post