presented by The Visceral Company

Fully committed to the tropes and excesses of exploitation cinema, the cast and crew of The Baby revel in this sick and demented little domestic melodrama. There is a sincerity is buried beneath every insincere choice and moment of over-the-top emoting. This is a loving farce of an obscure and obscene film, and is the most fun I've had at a play in a long time.

Baby is a grown man whose development has been frozen in infancy. When a new social worker comes a calling, her attempts to bring Baby out of his shell and into manhood open up a twisted game of cat an mouse with Baby's sisters and mother. The fun and games culminate in a twist -- a twisted twist -- that has to be seen to be believed. The story is fiendishly clever.  Most grindhouse fare would stop at the basic premise and fill an hour and a half with just that.

Director Dan Spurgeon (who also adapted the play from the screenplay by Abe Polsky) keeps a stilted script from playing stilted, taking every advantage of the hammy possibilities the material presents. It's always hard to guess how much an actor brings and how much a director elicits, but it is plain to see that Spurgeon created a safe space for his cast to blossom in absurdity. He keeps up the pace as well, and transitions are seamless.

The cast is fantastic, but three actors in particular stand out. Firstly, Torrey Halverson as the titular Baby never lets the mask slip. Never. Even in blackouts, one can see his silhouette crawling towards the wings. The unfocused eyes, the gaping mouth, the lax muscle control -- this is a characterization born of careful observation and diligent practice. And yet, even when Baby does creepy things (and a hat tip to Jonica Patella as the Babysitter for being party to the creepiest thing I've seen on stage since ... ever) even when Baby does unspeakable things, he seems completely innocent and without blame.

Jana Wimer flirts with insanity as the straitlaced, dedicated social worker, Ann Gentry. What is her interest in Baby? Genuine altruism? Sexual kink? Perhaps there's some unknown yet jaw-droppingly warped selfish purpose? Wimer plays the cipher well, never tipping her hand (until things get thoroughly tipped). Her moments of wide-eyed crazy are hilarious and haunting.

Finally, Frank Blocker as Mama Wadsworth. Look, here's the deal. The novelty of casting a man in drag as the matron of the Wadsworth clan is deserving enough of praise. It's a clever choice that adds a certain John Waters-esque vigor to this adaptation. The fact is, Frank Blocker owns every inch of this role, is in charge of every moment. He is an actor, as they say, fully in command of his instrument. It is such a thoughtfully charted persona, it's almost Shakespearean in magnitude. (Considering the King's Men did drag as well, that's not such a crazy comparison to make.)

I need to make mention of the sound design. They don't credit it as such, instead listing Neel Boyett as the Music Advisor. However it went down, whoever decided to program a preshow playlist with the creepiest cover tunes of 1970s soft rock hits ever recorded, kudos and thank you. You set the tone so well, I was chuckling before the house lights dimmed. Throughout the play itself, there were moments underlined by perfect music cues. It added so much to the evening, to the exploitation cinema feel, I can't imagine the show without them.

The Visceral Company is extending their run of The Baby to the end of August. Don't miss this funny and perverse excursion into 1970s cinema excess.

The Baby has playtime on Fridays and Saturdays at 8:00 pm through August 31st at The Lex Theatre, 6760 Lexington Ave., in Hollywood (just east of Highland.) Street parking is available, but you will have to hunt for it. Get there early and be sure to read the street signs. Tickets are available online. Be advised that there is some nudity and (disturbing) adult situations.
By Andrew Moore - July 06, 2013

Photo by Marcelo Jaboo One of the damndest things about theater happens to be its greatest strength: it lives and breathes in the moment. ... 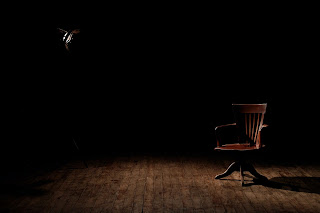