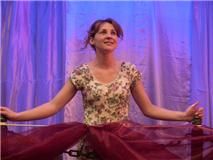 Produced by Merry War Theatre Group at the American Legion Hollywood
﻿[DISCLOSURE:  Co-founder of MWTG and Assitant Director of this production, Phillip Kelly is a dear friend and collaborator (he's one half of "Mssrs. Snapper & Buddy," a neo-vaudvilian act.  I'm the other half.)  He's also the rare person with whom I can be brutally honest about things of an artistic nature, and vice-versa.  There are no eggshells between us, and we've often disagreed passionately about theatre.]
I enjoyed Merry War Theatre Group's production of Romeo and Juliet.  An earnest, appealing cast brings a scrappy production of a Shakespearean staple, relishing in the humor of it all.  We've all seen this show.  We've read it.  We know it like few other Shakespeare plays.  Merry War ditches the emo-melodrama and mines the humanity of Romeo and Juliet's relationship.  When Romeo kills Tybalt in an act of revenge, things begin spiralling out of control.  The stakes become real for the star-crossed lovers in a way I haven't seen happen before.  The storytelling is from the heart and from the head.

The play begins in the downstairs bar, where improvised business between characters leads to the prologue.  This production of Romeo and Juliet takes place in the Verona Hotel and Casino.  The Montagues are service industry workers, the Capulets are patrons of the hotel and casino.  As seems to be the case all too often with attempts to stage Shakespeare somewhere else, the framing conceit doesn't add much to the storytelling, and doesn't play much further than the prologue in the bar.  It doesn't distract, either -- oftentimes what seems like a clever idea imposes itself too heartily on the text, warping it.  That does not happen here.

The principle playing space is a cavernous, dark atrium in the center of the American Legion building. The actors are before us and to our right and left on the ground floor. They are also above us, on a second floor balcony that surrounds us. We are in the center of all the action, and director Chase McKenna uses this space to great effect.

McKenna is a lovable Juliet, and her Romeo, Adam Burch, is equally appealing.  Other stand-outs in the ensemble include McKinley Belcher III who imbues Mercutio with a delightful flippancy, and Bobbie Keegan who brings a brogue-ish charm to the Nurse.  I'm happy to say there's not a dull note in the entire cast.

BRING CASH FOR THE BAR!  And keep in mind that you may not bring your drinks with you into the principle performing space.

Fridays, Saturdays and Sundays at 8:00 pm through December 12th at The Hollywood American Legion, 2035 N. Highland Ave., Los Angeles.  Bar opens at 6:00pm.  There is ample parking at the American Legion, but bring $5 CASH.

Tickets via Brown Paper Tickets or Goldstar.
Posted by Andrew Moore at 1:45 PM No comments: Links to this post

"No matter how huge the goal, project or problem, if you diligently continue to chip away at it or take even the tiniest steps forward to correct the situation, you can achieve the results that you desire…”

There is a fantastic interview with burlesque dancer/ravishing beauty Catherine D'Lish at 21st Century Burlesque that brings to mind the concept of a "showperson."  (Note: There are a couple of NSFW pictures embedded in the article.)


I absolutely feel that it is each performer’s responsibility to entertain the audience. That somebody being on stage makes them feel good about themselves, or empowered, or that they are sending an important message to educate someone should take a back seat (in my opinion) to holding the interest of the spectators. I’m not saying that every act should be frivolous fluff, just that the individuals sitting (or standing) out there in the dark must be presented with something that doesn’t leave them feeling left out.

For some time I've meant to publish an essay on burlesque as a perfect theatrical form.  That's a work in progress and will probably turn into one of my ponderously pedantic multi-parters.  In the meantime, I encourage you, the reader to seek out a burlesque show and see what it's all about.  With the new Cher/Christina Aguilara movie dropping soon, you may be inclined to believe the glossy Hollywood take on what is in fact a vibrant, growing artform.

In Los Angeles, I recommend Peepshow Menagerie, Monday Night Tease and Victory Variety Hour.  That's where you'll find me onstage these days.
Posted by Andrew Moore at 9:43 AM No comments: Links to this post


﻿... things would be very different.  As Pamela is fond of quoting, "You live and learn and then there's Luvs."

How different, you ask?  Try this on for size:

We, the undersigned, agree to work together in creating works of art inspired by passion, under the banner of “The Autonym.”

Our participation in this association is entirely voluntary and at will. We owe no allegiance to The Autonym. We are not members of The Autonym. Rather, we align ourselves with each other, as individual artists and with mutual respect.

The Autonym has no bylaws, no logo, and no fixed location in space. There are no dues and no membership requirements.

Individual artists who wish to produce a work of art inspired by passion under the banner of “The Autonym” must work out individual agreements with other Autonymic artists, as necessary. These agreements exist outside The Autonym, and shall not alter, amend or alloy this agreement.

Individual artists may take it upon themselves to establish activities to facilitate the voluntary association of artists under the banner of “The Autonym,” but such facilitations shall be the sole responsibility of the individuals who chose to pursue them, and shall be pursued respectfully in regard to other Autonymic artists.

It is requested but not required that Autonymic artists acknowledge their participation in this agreement with the words, “Produced in Association with The Autonym.”

As “The Autonym” indicates an agreement to work with other Autonymic artists, it is suggested that a work of art produced under the banner ought to have more than one Autonymic artist involved.

Autonymic artists may withdraw their participation in this association at any time, for any reason by respectfully announcing that decision to the other Autonymic artists.

This agreement will terminate one year after the second signature date below. It may not be renewed. Rather, if the undersigned agree to continue working together in creating works of art inspired by passion, they may choose to revive the banner with a new agreement.

(* Literally, "A name by which a people or social group refers to itself.")

"The Autonym" is a purposefully artificial construct. It is little more than a statement of intention to work together, and a banner to signal to the public that a particular group of artists has produced a specific work of art.  (It is also one letter off from "antonym."  Make of that what you will.)

It's either about passion and eagerness to work together, or it's pointless. Why settle for a Sisyphean chore when there are many other mountains to climb?
Posted by Andrew Moore at 3:00 PM No comments: Links to this post