[Disclosure: I am president of Theatre Unleashed, Inc., the company that produced this show.]

"Man's unhappiness, as I construe, comes of his greatness; it is because there is an Infinite in him, which with all his cunning he cannot quite bury under the Finite."

Theatre Unleashed's production of 4.48 Psychosis, directed by Phillip Kelly, is revelatory. It reminded me of reading Thomas Carlyle's masterpiece, Sartor Resartus for the first time: Humanity at its rawest ebb; pain and anger made tangible.

Kelly's staging is simply incredible. He has created a cavernous fun-house, a music box smashed to bits and pasted back together, a stream of consciousness that manages to engage rather than simply wash over the audience. He accomplishes on stage and in real time what cinema can only hope to accomplish through mechanical trickery.

Supple and eloquent performances from Fesa Silillas and Kimberly Niccole enthrall. This piece demands a sustained energy from the performers, an emotional and physical stamina that never lags throughout the play's tidy, seventy-five minute run. Silillas and Niccole are unflinching and fully engaged in their bifurcated role. Their separate energies create a fearful and wonderful synergy. (And there's your free Bible reference for the day.*)

Matt Ryan reflects the lone outside voice, and is in some small way a proxy for us in the audience. His helpless frustration at times mirrors our own. This ballast keeps the play from sinking into an irredeemable puddle of despair. He anchors the piece, giving a much needed counterpoint to the dwindling sprial that plays out before us. This provides us the only context for the events to which we bear witness.

Kelly Musson, through her dance, provides what may be described as a descant. In choral music, a descant is a counter melody, in a higher pitch than the main melody. Her work sets off and comments upon the performances of the actors, yet remains its own voice in the arrangement. Likewise, the cello work of Peter Walden provides another face to the fractured prism of our protagonist's descent.

The production design never overstates itself and integrates seamlessly with the intent of the director and work of the actors. Yelena Babinskaya's set design makes tremendous use of the Sherry's deep, shoebox-like playing space.

My only complaint is reserved for the playwright herself. Granted, this was her last work before committing suicide, but whereas Carlyle passes from the Everlasting No through the Center of Indifference and on to the Everlasting Yea, Sarah Kane takes us from bad to worse. Aside from the fleeting scenes with the psychiatrist, we have no context for what transpires. It is on the strength of the actresses alone that we have any sympathy whatsoever for the subject of the play ("protagonist" seems a woefully inadequate handle.) I can see how this play could become a drudgery, an exercise in scenery chewing and audience bludgeoning, if handled by less skilled hands.

Fortunately for all of us, this production has been handled by a director with keen aesthetic judgment and an ensemble that fully commits to every inch of the abyss. 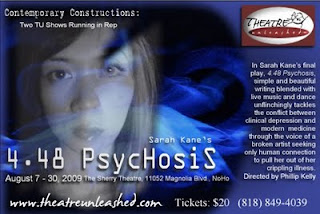 [* Psalms 139:14 "I praise you because I am fearfully and wonderfully made; your works are wonderful, I know that full well." Artists have godlike creative powers when they are on their game, which this ensemble most assuredly is.]
Posted by Andrew Moore at 5:24 PM No comments: Links to this post