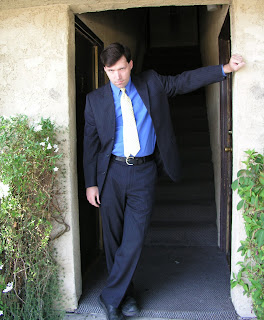 And now a word from the President (pro tem) ...

Back in January, Pamela and I got together with a small group of our friends, and discussed the possibility of forming a new theatre company. This discussion (at a Denny's, no less) was the culmination of many private conversations that had been taking place over the preceding months.

I am proud to announce the formation of our company:

I have been entrusted by my fellows with the responsibility of serving as President, pro tem of the Board of Directors (hence the photo of gravitas-exuding-Executive Drew at the top of this blog entry.)

At its core, the mission of Theatre Unleashed is simple: to work together as one, passionately and professionally, in creating truly remarkable theatre. Theatre Unleashed celebrates the creative collaboration process by encouraging its members to explore fresh, edgy, thought-provoking approaches to both original works and established shows. Theatre Unleashed will experiment with various forms of multimedia to heighten the entertainment experience while staying true to the playwright’s words, characters and thematic intent. Story-telling will always be the driving force behind any Theatre Unleashed production as the company pledges to always push its artistic boundaries, striving to reach that emotional resonance with our audience that only live theatre can create.

We are in the (very) formative stages at this point, filing our paperwork and raising our funds. We have a season scheduled, and we have some very exciting things in store. But more about that in the coming weeks! In the meantime, I invite you the reader to visit our MySpace page and befriend us.

It's going to be a wild ride. I'm just happy to be here!
Posted by Andrew Moore at 9:18 PM No comments: Links to this post

[NOTE: Much like my earlier blog on Antonin Artaud, the following is a work-in-progress; an airing out of some notes I've kept and thoughts I've thunk. I'm very interested in any feedback from the two or three people who occasionally (accidentally?) find their way to this blog each week.]


An aspect of my original collegiate experience that I did not fully appreciate at the time was the discipline of scholarship: the necessity of researching a subject, digging deep, drawing conclusions and writing up the findings. I wrote a number of papers, most of them cranked out at the last possible moment and hardly deserving of the grades I typically received.

The necessity of doing scholarly work (e.g.: for a grade,) the pressure of a looming deadline and the demand for good and honest research -- these things taken together I place under the heading of "Discipline of Scholarship."

I revisted Brecht to both reacquaint myself with his "epic theatre" techniques and to fill in the holes in my education. I feared this would be a dry, boring subject. I hated reading his plays in my college days. I was delighted to discover I was wrong. In compiling my reading list, and in addition to the famous bio by Martin Esslin, and a collection of Brecht's own writings entitled, rather succinctly, Brecht on Theatre, I discovered a wonderful little book by Ronald Gray simply titled Bertolt Brecht (1961, Grove Press.) This paperback is part of a "new series ... planned to meet the need for inexpensive, up-to-date and readable introductions to the work of modern American, English and European writers." It's a 114 page summary of Brecht's life and work with an ample survey of "the best published criticism."

It was a very instructive read. One of the things I never liked about Brecht, and perhaps the main block keeping me from an appreciation of his plays, has been his dedication to communism. I find it interesting to learn that Brecht served as a medical orderly in WW I, and in the post-war years aligned himself with the only overtly pacifistic group in Germany at the time, the Communist Party. Later in life, he was highly critical of the communist power structures in the Soviet Union and East Germany.


V-effect and the "Little Organon for the Theatre"

Gray gives us an excellent chapter on Brecht's "Theories and Implications." This chapter quotes Brecht extensively, particularly from his "Little Organon for the Theatre," a sort of manifesto he wrote in 1948. In it Brecht states that the theatre is a place where the Laborer might "enjoy his terrible and never-ending labors as entertainment, together with the terrors of his ceaseless transformation."

"The easiest form of existence is in art," he says.

"Once the world is presented as strange, it must also arouse in the spectator the desire to alter it." And here we come to the dreaded verfremdungseffekt, or "V-effect" for short. Two things I know about V-effect from college: It's always italicized when spelled out in the original German, and no one knows exactly what it means. It is often translated at "the estrangement effect" or "alienation" but we're told that these are not exact translations. Babel Fish translates it to mean "foreign effect."


The estrangement effect occurs when the thing to be understood, the thing to which attention is to be drawn, is changed from an ordinary, well-known, immediately present thing into a particular, striking, unexpected thing. In a certain sense the self-evident is made incomprehensible, although this only happens in order to make it all the more comprehensible.

To me, this means providing an audience with the opportunity to view life or some aspect of it with "new eyes." By having soldiers carry spoons and forks instead of guns, we may alienate an audience. Perhaps as a result this audience will see the soldiers as if for the first time, and come away with a new viewpoint, maybe something like "soldiers gotta eat."

And so I come to the end of my Brecht notes. I haven't returned to the subject in some time (I've kind of been busy,) but I hope to finish reading Esslin's bio and Brecht on Theatre. I am intrigued by the idea of doing a Brecht play in true Brechtian fashion, as soon as I can figure out what that is!
Posted by Andrew Moore at 6:53 PM 2 comments: Links to this post