The Inventor, The Escort, The Photographer, Her Boyfriend, and His Girlfriend 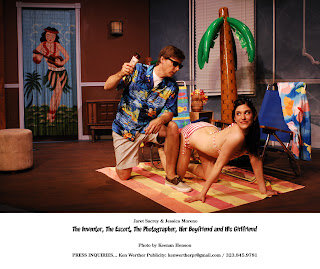 At the end of the night I joked that there should be a semi-colon between "The Escort" and "The Photographer."  Punctuation-based humor plays big with the company I keep.  But joking aside, Matt Morillo's play in its West Coast Premiere really is two one-acts spackled together; an evening of theatre that doesn't try to be more than good fun and almost succeeds.

In act one, we meet the titular escort and inventor.  A routine business transaction between a consumer and purveyor of sex-for-hire is turned on its head, and a relationship is born.  In act two, jealousy besets a couple in an open relationship, and things only get worse when the third wheel is unveiled.  (And boy howdy, is she ever "unveiled.")  Let's get one thing straight: The plot is not what is important here.  The plot is mere window dressing for the jokes.  And the nudity.

The cast is appealing, dialed up to a "Three's Company" level of presentationalism.  The acting is consistent with the pretended sentimentality of the first act and the near slapstick sexuality of the second.  Jaret Sacrey (Jeffrey -- the inventor) is a stand-out, offering up a believably awkward yet good-natured geek who only fleetingly seems like a potential serial killer. 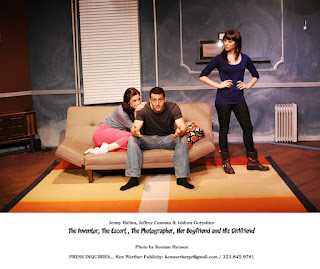 Jenni Halina ("Molly") won me over before she disrobed.  In an accident of live theatre, two photographs bounced off the wall and crashed to the floor.  And there the photos remained as the photographer and her boyfriend argued in circles about something we had no real context to understand.  Halina actually took the time to clear one of those photos -- the one whose glass had broken -- improvising the line, "You guys really were arguing!"  I smiled and made a mental note:  Halina was the only actor fully plugged into the reality of the scene.  She was an absolute delight before we got to see her girly bits, and it's important to specify this because reviews usually praise the actress who got naked -- I'm guessing out of a desire to see more of the same (i.e. "get naked = good review"). She was completely committed to what was happening on the stage in this performance, a necessity for good theatre.

I'm sorry if my take on this play reads at best, withering, or at worst, cynical.  I had a good time at The Inventor.  It made me laugh out loud, and I got to feast eyes on a young attractive woman in her natural state for the better part of act two.  For me, that should be enough.  But I know there is a whole raft of people out there for whom that isn't enough; folks who demand more and deserve more from their theatre (or "theater" if you're being semantically persnickety).

And maybe we should expect more of Matt Morillo.  His blocking is largely uninspired and his writing is at times trite.  He managed at least five "dead kitten" speeches (as David Mamet terms them) in act one alone.  Morillo is capable of better.  There is some really clever stuff in act one: unexpected call-backs and brutally funny moments that leave the audience in stitches.  Act two delivers up a surprisingly non-exploitative, non-perverse stretch of full nudity.  What he does right, he does really right, and it only makes the mediocre parts hurt more.  That's what irritates me most about this show.

The Inventor, The Escort; The Photographer, Her Boyfriend, and His Girlfriend lets you see everything  Fridays and Saturdays at 8pm; Sunday at 7pm through July 8th.  Tickets are $20 and are available by phone: (323) 960-7712, or online: www.plays411.com/escort.

The Lounge Theatre is located at 6201 Santa Monica Boulevard, just east of Vine, in Hollywood. Street parking is available, but try to get there a little early.
Posted by Andrew Moore at 9:26 PM